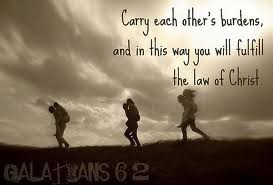 Startled by the ring tone of dogs barking, signaling a text message on my phone, I quickly sat up from a deep sleep.  After trying to rub away the blurriness of my weary eyes, I managed to finally focus on the late night hour.  Immediately I knew something was wrong.  I read the text which confirmed my gut reaction.  A dear friend was asking for prayer for her sick and physically frail husband.

I wasn’t surprised by the message of her text, nor was I inconvenienced by the late hour at which the request came.  After all, missing an hour of sleep to pray was effortless compared to the countless hours they had spent battling at hospitals or treatment centers. This “spiritual giant” of a man has been an integral part of my own spiritual development, so of course I would respond to the request with great awareness and tearful pleas to heal him.  As I was praying, asking for the same healing, the same miraculous intervention as I had many times before, it hit me…

“Carry each other’s burdens, and in this way you will fulfill the law of Christ.” Gal 6:2

I couldn’t neglect this verse in my mind.  I kept seeing words flash or lingeringly drift through my thoughts.  “Carry,” “burdens,” and “Christ” were coming in and out of focus.

I wonder, have you ever so deeply and desperately wanted to carry someone else’s burdens that your heart physically ached for it? I don’t mean out of pity or simple sorrow. I mean truly anguished and genuinely obsessed with taking on their burden or ailment as your own. You’d give anything, even lay down your life, to be able to extract the “thorn in their flesh” and let it penetrate your own.

Fast forward a few months and once again, I am on my knees repetitively begging for healing and wholeness for a man I so greatly admire. I am convinced that if God allowed me to take on his physical burden then he could continue impacting the kingdom of God in ways I never will.  On many occasions, I have drenched the “feet of Jesus” while begging and pleading to trade places with him, but, just like each mournful episode before, today I am met with the same silent, yet obvious answer,  No.

“Why not, God?  You are certainly powerful enough.”  “You tell me to ‘carry [his] burdens’ yet practically speaking, it’s impossible for me to carry his illnesses and sickness and disease.  What,… what would you have me do?”

I feel helpless. (I can’t fix or practically do anything to heal him.  Guilty.  (Going about my day to day routine while he suffers  and remains bed ridden.)  Anxious. (What news will the next text bring.)

“So, God, exactly how am I suppose to “carry each others burden” when there is seemingly nothing I can do?”

God, in His gracious and loving way, reveals His objectives for this verse to me.  First of all, the simple statement “carry each other’s burdens” tells us that we can be confident that everyone will have burdens in this life.  No one is excluded.  These burdens come in all sorts of shapes and sizes.  Physical, emotional, or even mental.  They can be brought on by our own decisions, the effects of sin by another or just plain bad luck. None the less, it is clear that no one is exempt and everyone, at some point during life on earth, will feel the weight of heaviness from trials and circumstances.

Secondly, we are called to carry, walk beside, and help uplift the weak and frail in their time of need; not rescue them.

I would love nothing more to relieve my friends pain.  Cast it out and restore him fully.  If I had the power, I would heal my adopted son’s brain damage from having been exposed to alcohol in the womb.  I’d rid him of his insecurities and fears that are attached with his diagnosis so he could live a “normal” teen-agers life.  I’d take away his loneliness that invades his heart on a daily basis and convince him that his life is valuable and that he can make a difference in this world.

But, what Galatians 6:2 teaches me is that I am not suppose to intercept what God is doing, I am suppose to be a part of what He is doing by being present and helping take the emotional load off and reminding them that they are not alone and help infiltrate their heart and mind with truth.   I need to follow Christ’s example.

When Jesus prayed, in the Garden of Gethsemane, he begged God three times to “take this cup from him.”  But God didn’t.  He allowed his son to endure it because He knew greater things would come as a result.   Though they were weak and tired, Jesus called on his disciples to pray with him, to help “carry the burden” of what he was about to face by praying with Him.  He included them in His sorrow, knowing they couldn’t take the cross away from him.  He modeled the truth that we never have to face it all alone.

Obviously, there are many burdens that we are surrounded by every day that we can literally help carry.  Someone struggling financially;  Elderly people or single moms who need work done on their house;  A teen struggling with grades;  Shoveling a neighbors driveway. We are surrounded by people with tangible and fixable burdens.

However, in this circumstance, all I have to offer is prayer.   But in reality, is there anything more powerful?

Prayer is exactly what Jesus asked for at the time of His greatest need.  Jesus knew that prayer connected him with his disciples and allowed the burden of sorrow to be shared.  I can’t bring healing, but prayer can.  I can’t bring insight and meaning to the pain, but prayerful conversation with God can.  I can’t bring unity amongst a crowd of people in a way that makes those who are suffering aware of a supernatural being that can infiltrate their bleak circumstances with an unexplainable peace.  Only prayer can.  Prayer unites the broken and weary who are suffering heavy burdens with those who are capable of sharing the load on a supernatural level.

So I will pray, pray, and then pray some more and before, during and after the praying, I will trust. Trust that God is still in control and has a plan and that He will bring purpose and meaning into their pain.   But above all else, I will never give up praying.

One thought on “Spread the burden, share the pain!”