He lounges in his favorite spot, feet propped up, and southern style tea by his side while she settles beside him on his right with newspaper in hand. The paper is flapping softly from the movement of the air circulated by the fan above. I am nested precisely where I always am.  I observe no divergence from the routine, yet something seems, well, unexplainably off.  Silence is interrupted by gravel being crushed and turned under the weight of tires.  A brief glance between the two says this is an unexpected visitor.

Swift and loud, a toss of the news to the side, she makes her way to door.  He turns his head slightly to hear the conversation.  As she opens the door, a man with a badge on the other side wastes no time with formalities.  “Fire is headed this way.  Evacuate now.”  The man turns to retreat toward the next home and is gone.

“I heard,” he says, turning circles, contemplating what to grab.

Nested in my spot, I helplessly look on as they frantically side step each other, toss random things about and yell commands from room to room.  If only my wings were real, if only my porcelain self could guard the way I imagine.  All I have is the prayer with which I was given as I am limited and even frailer than they.  The second hand on the clock barely makes its way around 2 rotations before the man with the badge bangs again.  Forceful and unforgiving he says, “Now!  No time to take anything.  Get in your cars and go.”   They each grab a set of keys, a bag of medicine and a suitcase half packed with nothing. They go.

Through the window on my left, I catch the shock stricken look in his eyes.  I pan to the back.  Dancing flames twist around evergreens and leap from one branch to another as if being tossed through the air. The glow is breathtaking.   A squeal of rubber and the tail lights of both cars fade in the distance.  Crackling sound and roaring wind and all is reshaping.  Walls collapse and disintegrate.  I shift downward. Blinding smoke, explosions and shattering glass all around.  I bump against the others, wings and pieces break off. Another shift of movement in the darkness and I descend again in a mound of indistinguishable ashes.  I wait and wait.

The smoke clears in time.  Ashes still smolder. I lie here alone, somehow intact.  Solid iron beams around me now have curvature.  Black, charred markings have tainted most everything.  Solid glass has been reformed to clumps on the ground. 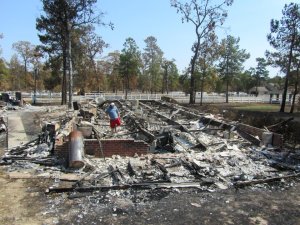 My parents home destroyed by fire.

There is crunching and small clouds of gray puff with their steps.  I see her.  She moves, first turning away, then forces another look.  Her eyes soak in the scorched memories.  His do the same but land idle on a particular spot.

“Look!” He touches me, but immediately retracts his hand, wiping his fingers on his jeans.  He pulls out a handkerchief and lifts me up. 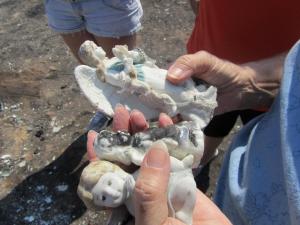 Her angels somehow in tact.

Her eyes speak as she caresses me in her hands and a tear drop falls, washing away the soot.  Though all is gone that eyes can behold, those things closest to the heart still remain so.

A bible scorched in the fire…but the words of life survive.

One thought on “Watchful Eyes!”